The Birth of the Pandavas and Kauravas 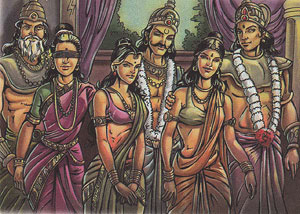 Bhishma wanted Pandu, the king of Hastinapur, to get married. Kunti, the adopted daughter of King Kuntibhoja, chose Pandu as her husband and was married to him.

Princess Madri of Madra kingdom also wanted to marry Pandu, so she became his second wife.
Gandhari, the princess of Gandhara kingdom, was chosen as the bride for Dhritarashtra. Dhritarashtra was blind, and Gandhari did not want to be better than her husband in any respect. So she tied a silk bandage on her eyes and pledged never to remove it. A suitable bride was also chosen for Vidura , the minister of Hastinapur, who was raised as a brother of Pandu and Dhritarashtra .

As time passed, Kunti gave birth to three sons Yudhistira, Bhima,and Arjuna. Madri gave birth to twins and name Nakula and Sahadeva . As these five were the sons of Pandu , they are called the Pandavas.

Gandhari wanted a hundred children so she prayed to Saint Vyasa who granted her the boon . But Gandhari gave birth to a lump of flesh. Vyasa cut this lump into hundred and one pieces, which formed hundred boys and one girl. These children of Dhritarashtra were called the Kauravas as they belonged to the Kuru dynasty. The eldest of the Kaurava brothers were called Duryodhana .
Download Now