Read the following text and then answer the question! 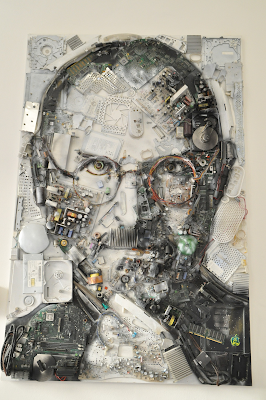 Steve Paul Jobs was born on 24 Febuary 1955 in San Francisco, California, to AbdulFattah Jandali and Joanne who gave him up for adoption. He was taken in by Paul and Clara Jobs, and grew up with them in Mountain View, California.

He attended Homestead High School in Cupertino California and went to Reed College in Portland Oregon in 1972 but dropped out after only one semester, staying on to “drop in” on courses that interested him. He took a job with video game manufacturer Atari to raise enough money for a trip to India and returned from there a Buddhist.

Back in Cupertino he returned to Atari where his old friend Steve Wozniak was still working. Wozniak was building his own computer and in 1976 Jobs pre-sold 50 of the as-yet unmade computers to a local store and managed to buy the components on credit solely on the strength of the order, enabling them to build the Apple I without any funding at all.

The Apple II followed in 1977 and the company Apple Computer was formed shortly after-wards. By the time production of the Apple II ended in 1993 it had sold over 6 million units. In 1985 Jobs was fired from Apple and immediately founded another computer company, NeXT.

In the meantime, in 1986, Jobs bought The Computer Graphics Group from Lucas film. The group was responsible for making high-end computer graphics hardware but under its new name, Pixar, it began to produce innovative computer animations. Their first title under the Pixar name, Luxo Jr. (1986) won critical and popular acclaim and in 1991 Pixar signed an agreement with Disney, with whom it already had relationship, to produce a series of features films, beginning with Toy Story (1995).

In 1996 Apple bought NeXT and Jobs returned to Apple, becoming its CEO. In 2003, Jobs was diagnosed with pancreatic cancer and underwent surgery in 2004. Despite the success of this operation he became increasingly ill and received a liver transplant in 2009. He returned to work after a six month break but eventually resigned his position in August 2011 after another period of medical leave which began in January 2011. He died on 5 October 2011.

2. Where did Steve Jobs grow up?
Answer: Mountain View, California.

3. Why did he take a job to Atari?
Answer: To fund his trip to India.